Recorded at Abbey Road Studio 2, no expense has been spared to produce the most beautiful record we could imagine. As followers of Coup d’Archet know, quality of sound has always been our primary concern and we have always sought to work with the best in the field.

Cut to lacquer at Abbey Road, audiophile pressing on 180g vinyl by optimal media GmbH, the 69 minute double album is presented in a deluxe heavyweight matt-laminated gatefold jacket with insert. The first 1000 copies only will be accompanied by 48 minute companion LP, Sine Qua Non Plus, which boasts all the above qualities but in a single stand-alone jacket. Not to be missed.

Abbreviated version of SQN now available on CD. Over an hour of earthly delights housed in a deluxe matt laminated triple-fold digipac.


TRAILER Looking for Melody The Recording of Sine Qua Non

It was in the spring of 2009 when I saw Gilad’s Orient House Ensemble and the Sigamos String Quartet performing their Charlie Parker with Strings project.  It was the first time I had actually seen two such quartets work together.  This meeting of two disciplines, the improvisational and the formal. But instead of transporting me to 50’s New York, I was reminded of Neil Ardley’s shimmering original arrangements for jazz and small string ensemble, of sixties soundtracks and chamber pop… John Barry and Morricone, Cipriani and Nicolai, Roy Budd, Dankworth and Quincy Jones, Legrand and Colombier, Dusty and Scott and Gainsbourg.

Some eighteen months later I was sequestered alone in a friend’s remote farmhouse high on a hillside in Haute Provence in the hot Indian summer of 2011.  Gilad’s In Loving Memory of America was receiving repeated play.  On Youtube one night I came across two tunes sung by the actress Mireille Darc.  I had been quietly collecting Gainsbourg records since my first forays to Paris in the service of Coup d’Archet and L’Archet d’Or but had never heard these extraordinary songs, Hélicoptère and Le Drapeau Noir.  The idea came like a storm.  There was a record I needed in my collection that didn’t exist yet.

The following day I contacted Gilad asking if he would be interested in a project.  He was.  I contacted Matt Bourne who I had met in Leeds earlier in the year. Emails and sporadic telephone calls continued over the months.  Gilad introduced me to Ros.  Decisions were made, lines were drawn.  Ros began putting together her dream strings team.  In the summer of 2012 I met Leo Lara in Tarifa and invited him to record in London.  Rehearsals began at Saint Mark’s Church St John’s Wood in October, recordings took place at Abbey Road Studio 2 later that month and in November.  Mixing was completed at Eastcote Studios in March 2013.  Peter Doig kindly created the extraordinary artwork for this album and its companion, Sine Qua Non Plus, in December.

My original brief for this album was that it be intimate and unashamedly romantic….while avoiding cheesiness at all cost.  It’s an album about love, its manifestations and its symptoms.

With all respect to SG.

Laying bare the beauty of Gainsbourg’s melodic invention….The combination of string section with horns, various keyboards and bandoneon results in a fascinating tango/jazz take on Gainsbourg … The group sessions are really a collection of tone poems, taking you one moment to a French café, the next to a jazz club then on to an avant-garde ensemble performance. The guitar album is more straightforward – always lush and seductive. A constant throughout is fabulous sound. Nothing that has come through my door lately has seen as many rotations as this remarkable collection of discs.
Recording 10/10 / Music 10/10 Hifi+ April 2014

A lavish, lush even, collection of quality French popular songs composed by Gainsbourg and lovingly brought to new life… The music is esoteric and beautifully played by all concerned, although the jazz content is limited… (Atzmon) plays some of the most reflective and melodic solos of his career… Early purchasers of this exquisite (double) vinyl… will receive an extra LP, Sine Qua Non Plus, of acoustic guitar solos… Vinyl, covers and graphics on both are superb.
★★★★ Jazz Journal June 2014

Sine Qua Non from Coup Perdu has a cast of 13, including Gilad Atzmon, Yaron Stavi, Frank Harrison and Matthew Bourne. Unashamedly romantic, this incandescent splash of warm colours and shimmering textures restores your faith in the human condition - an album that deserves exposure, especially to a non-jazz public who have given up on jazz as a bunch of notes searching for a melody.
Stuart Nicholson - Jazzwise July 2014

This is a recording as sweet and natural as a caress, of music with an almost innate, relaxed sensuality. A treat as surprising as it is entertaining and thought provoking, Sine Qua Non will stretch your musical horizons. It’s not often that such fabulous music and performances are so beautifully served by their recording. Full Review >
The Audio Beat Music ●●●●● Sound ●●●●● 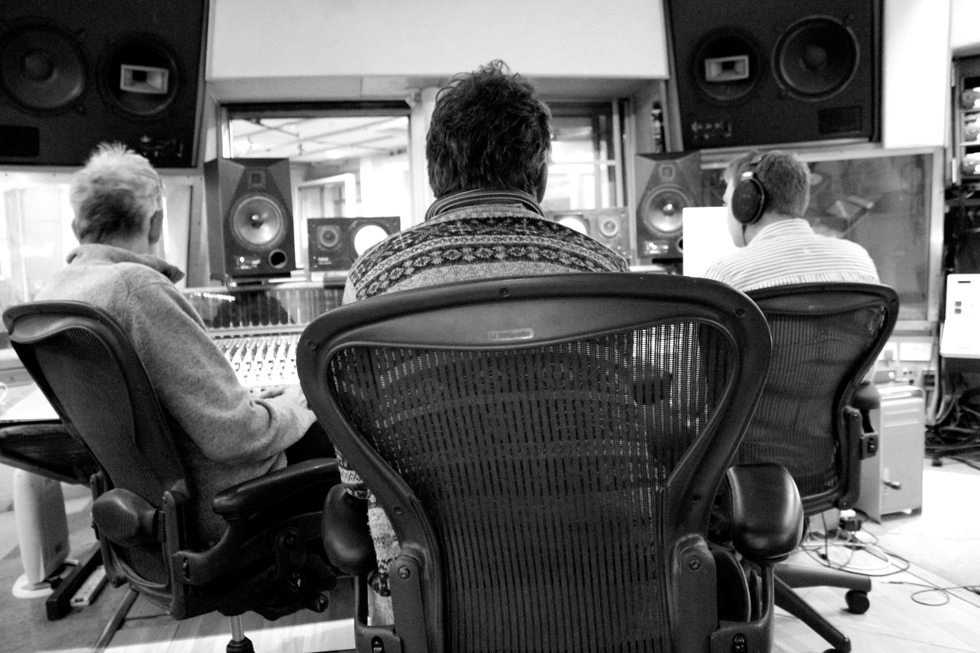 With PB and GM at Eastcote Studios